skip to main | skip to sidebar

I'm going to suggest you start using a Linux-based operating system on your computers, rather than Mac OSX or Windows. One reason for switching is because Microsoft is dropping support for Windows XP next April, and you will only be able to get Windows 8 (and then only after a hardware upgrade). If you don't want to buy a new computer, switching to Linux could easily save you from that.

Many Linux variants (called distros) are easy to install, use, and maintain. They do really well what most people do on their computers: surf the web, email, chat on instant messaging clients, manage photos, and word processing. Few of these things are done exactly how they're done in Windows. But that's a feature, not a bug. In a lot of cases, the ways that Windows does these things are kind of lousy, but you're used to the problems. In the meantime, the new way of doing things will seem unnatural and awkward, but it was every bit as awkward and unnatural when you were first learning how to do it in Windows.

Before you consider installing a Linux distro, I urge you to The easiest way for most people to start with Linux is to use Linux Mint 13 (Maya) KDE Edition. The desktop is pretty, quite a bit like Windows 7, and Linux Mint 13 will be supported util April 2017, which means you won't have to reinstall until then. The next version of Linux Mint to have support past that date will be released no sooner than April 2014. Try the live version before installing.

There are other distros that are well-suited for beginners. These include openSUSE, Ubuntu (which has a novel interface called Unity that should also work for smartphones and tablets -- I recommend the LTS version), Kubuntu (again, I recommend LTS), Mageia, PCLinuxOS, and Lubuntu Extra Life Extention. They vary in how often they release new versions, what sort of desktop environment to provide, how long they support old versions, which software they think it is most important to support and update, and how devoted they are to software freedom.

Fedora is quite a bit trickier to make desktop-ready than any of these that I've mentioned. It is heavily supported by Red Hat, which is strongly devoted to free software principles. As a result, Fedora doesn't have a push-button easy way to enable Adobe Flash, many popular (captive) multimedia formats (such as DVDs and MP3s, as well as Adobe Flash), or the nVidia or Radeon proprietary graphics drivers. If installing FlashBlock in your web browser doesn't change anything for you, and you don't play any games with 3-D acceleration, this might not matter. Fedora is also devoted to cutting edge software and rapid release cycles.

Software freedom is one of the major reasons I prefer free software to captive software, like Microsoft Windows and Office, iTunes, Adobe Flash, Kindle, and Nook. They all mean to prevent you from actually controlling copyrighted content, but rather putting control of such content in the hands of others. And if they have to be able to hijack your computer without your say-so to keep that control, then they can. And really, do you deserves that kind of aggravation? Should you have to live with other people controlling your computer, because of so-called "intellectual property rights"? Is it right and just for (say) MGM or Sony Entertainment to delete your legitimate, legal, digital download of a movie or song, because somebody else posted a copy of it on Pirate Bay or MegaUpload or a similar site?
Posted by Arkanabar Ilarsadin at 7:30 PM No comments:

I've looked over Jorge Bergoglio's biography at CNS, and his Wikipedia page, and I have great hope. May God bless him and keep him, and richly bestow upon him the graces of his charism.
Posted by Arkanabar Ilarsadin at 2:40 PM No comments:

According to the USCCB, Rep. Diane Black (along with 50 cosponsors, has introduced legislation to require the HHS to respect the first amendment civil rights of believers. It's HR 940; you can search the Library of Congress for the bill; you can tell your representatives to cosponsor and support it (if they haven't already).
Posted by Arkanabar Ilarsadin at 3:51 PM No comments:

Email ThisBlogThis!Share to TwitterShare to FacebookShare to Pinterest
Labels: constitution, force, laissez-faire, rule of law, separation of church and state

Worth a Thousand Words 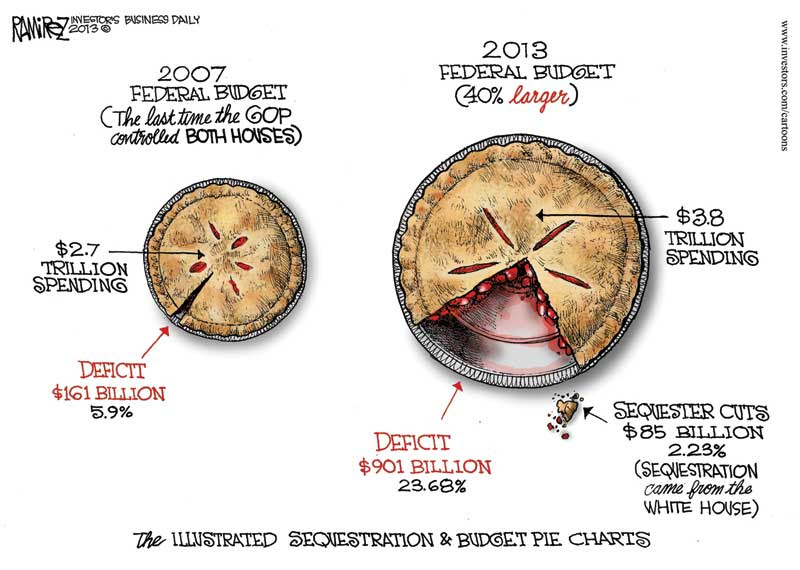 I'm not going to claim that the Stupid Evil party is significantly more moral than the Evil Stupid party, but I will say that they don't get away with the same sort of massive spending increases, and the opposition opposes them a lot harder than vice versa.

I'll also say that every extra dollar spent in the federal budget is prima facie an intrusion by the federal government into private lives.
Posted by Arkanabar Ilarsadin at 1:14 PM No comments:

Patron of Everything In My Life
Pray for us!

Because if I can be forced to do what I find unconscionable, so can you

Being a List of Links to the Donation Pages and Direct Paypal Links to causes I think deserve to have you giving them money.

Instituted April 22, 2008. Put suggestions in the combox of this post.

Save A Family Plan

Comments are moderated.
First, because this helps me find new ones.
Second, because I've had comments that were nothing more than a means to link to a business site of which I do not approve (e.g., "Nice blog" or "Nice post" with the link in the commenter's name or the post itself).
Third, because some comments are personal attacks. I don't tolerate that crap. In fact, it was an anonymous F-bomb directed at another commenter that motivated me to enable comment moderation.

Try to stay on topic, and try to avoid gross rudeness.

All of my good works are possible only through the grace of God. In other words, they are gifts given freely to me by Him. Thus, all attributions are to God. And since He has given all so freely to me, how can I then selfishly not share His gifts with others? Thus, I impose no license on any of this work, and declare it all to be in the public domain.

Those who derive from it are on their own, legally, morally, and spiritually, though I will pray for them all, and ask Our Lady of Perpetual Help to do the same.

Catholic libertarian. Where the two conflict, Catholic usually wins. I have a website and an old blog. While my intent is to focus on heroes and heroism, that will not prevent me from ranting about whatever thoughts are so recurring in my head as to be annoying.