skip to main | skip to sidebar

Pius XII and the Jews

I left the religious and political debate community mentioned in the Obligatory Journey Post over a debate on infallibility. That debate was what first led me to formulate the argument used in my post here, Regarding Doctrine.

After I made that argument, the debate quickly degenerated into an endless series of ad hominem attacks against every member of the Catholic clergy and religious to make the news for their grave and egregious sins. I am very sorry that I wasn't wise enough to point out that these were in fact ad hominem attacks, that the sinfulness of the clergy has nothing to do with whether the Church's doctrines are correct, and that the burden of proof was on the other person to demonstrate that the evil those people did was in fact supported by Catholic Doctrine, rather than letting stand my opponent's contention that their vows of obedience to the Church were prima facie evidence that everything they did was supported by Church doctrine. Instead, to my lasting regret, I made the mistake of trying to defend the indefensible. This mistake made the debate so horrible for me that I left the community over it.

Perhaps part of the reason I found myself on this path is that one of the first victims of these attacks was Eugenio Pacelli, Pope Pius XII. The attack against him was the libel first accepted because of Rolf Hochhuth's defamatory play, The Deputy: that Pope Pius XII had been deliberately silent regarding the Shoah, because he was an anti-Semite.

I was able to refute this argument quite easily, even then. Between Rabbi David G. Dalin, Professor Ronald J. Rychlak, and Sir Martin Gilbert, there was plenty of material from non-Catholic sources. From learning about Pope Pius XII's actions during WWII, and from reading his encyclicals regarding the Third Reich (particularly Mit Brennender Sorge, which he wrote for his predecessor), I came to love him greatly. It gives me heartache that the lies against him are so much more widely believed than the truth.

One of the most telling arguments I had was a pair of maps.

This one shows where the NSDAP got their votes in 1932: 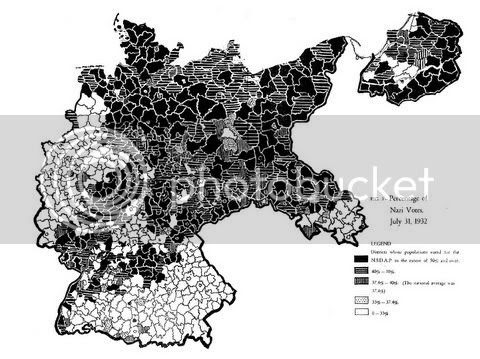 This one shows where the 1934 census found Catholics: 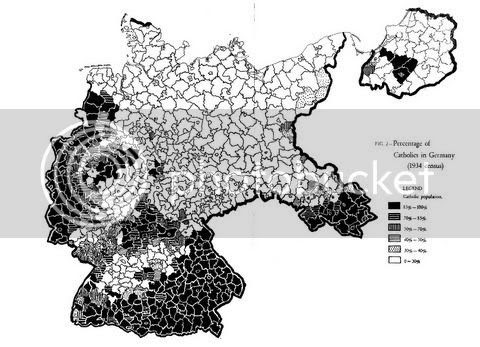 Still, it would have been very nice, back then, to have had this article on Catholic Exchange, which cites and quotes much of the historical evidence (and here I mean testimony of his contemporaries) that Pope Pius XII was one of the best friends that Jews had, during the Shoah. My love for the Jew-loving Pope (as he was called by his NSDAP enemies) drives me to post these links.
Posted by Arkanabar Ilarsadin at 5:39 AM 4 comments:

Salute to the Western Confucian, as he does it again: I sincerely hope that each and every law enforcement officer and member of the armed forces would take this oath, and defend these principles.

Needless to say, I'm cross posting this to the Catholic Cavemen and adding them to the blogroll.
Posted by Arkanabar Ilarsadin at 6:28 PM 1 comment:

In case I haven't made it clear, LOLSaints has become one of my favorite blogs. This post should make it clear why; to get the joke, pay close attention to the color coding.
Posted by Arkanabar Ilarsadin at 6:15 PM No comments:

Still No Material of My Own

Salute to The Western Confucian

I hope everyone reads this article by Walter E. Williams, and then writes their state legislators, urging them to follow his suggestions. I have been trying to imagine how we could put some teeth into the Ninth and Tenth Amendments for some time. They are vital safeguards of liberty, but our courts have made them dead letters in American jurisprudence for far too long.
Posted by Arkanabar Ilarsadin at 7:03 PM No comments:

I'm not playing b/c downloading the 3.1.0 Patch to Wrath of the Lich King is a demanding enough from my processor that I'm unwilling to try playing at the same time. As a result, I'm catching up on lots of blogs.

This two-hour video, suggested by the Western Confucian, is something I'd like to see -- IF I could download it via torrent. My family isn't crazy about somebody using all the bandwidth for extended periods of time. If you know where a bit torrent seed can be found, please mention it in the comments.
Posted by Arkanabar Ilarsadin at 5:54 PM No comments:

I want you to go and read this excellent post by Fr. Dwight Longenecker, explaining and defending Christian Patriarchy. It's really long, but the payoff is most certainly worth it.
Posted by Arkanabar Ilarsadin at 5:42 PM No comments:

Email ThisBlogThis!Share to TwitterShare to FacebookShare to Pinterest
Labels: blogrollin', defense of marriage

EEgah, Inc. has produced a supremely timely post about the culture of death. Who would have thought so lousy a film as Cherry 2000 could be so prescient?
Posted by Arkanabar Ilarsadin at 1:06 PM No comments:

Patron of Everything In My Life
Pray for us!

Because if I can be forced to do what I find unconscionable, so can you

Being a List of Links to the Donation Pages and Direct Paypal Links to causes I think deserve to have you giving them money.

Instituted April 22, 2008. Put suggestions in the combox of this post.

Save A Family Plan

Comments are moderated.
First, because this helps me find new ones.
Second, because I've had comments that were nothing more than a means to link to a business site of which I do not approve (e.g., "Nice blog" or "Nice post" with the link in the commenter's name or the post itself).
Third, because some comments are personal attacks. I don't tolerate that crap. In fact, it was an anonymous F-bomb directed at another commenter that motivated me to enable comment moderation.

Try to stay on topic, and try to avoid gross rudeness.

All of my good works are possible only through the grace of God. In other words, they are gifts given freely to me by Him. Thus, all attributions are to God. And since He has given all so freely to me, how can I then selfishly not share His gifts with others? Thus, I impose no license on any of this work, and declare it all to be in the public domain.

Those who derive from it are on their own, legally, morally, and spiritually, though I will pray for them all, and ask Our Lady of Perpetual Help to do the same.

Catholic libertarian. Where the two conflict, Catholic usually wins. I have a website and an old blog. While my intent is to focus on heroes and heroism, that will not prevent me from ranting about whatever thoughts are so recurring in my head as to be annoying.